The Foundation’s second annual golf tournament was hosted in association with OceanaGold on the St Clair course in Dunedin in perfect conditions in early October. 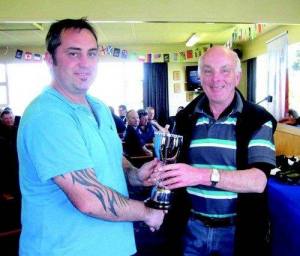 OceanaGold, a supporter of the summer research scholarship programme in 2010/2011, strengthened its alignment with the Foundation’s work by taking on the tournament’s naming rights’ sponsorship for an initial period of three years. That financial backing, aligned with the involvement of individual team entries and the hole and prize sponsors ensured a profit of almost $14,500 from the day. Those funds will be directed into the OceanaGold research grant, identified and allocated in May 2012.

A full field assembled for the tournament which is now viewed as one of the best on the local calendar.

A number of our hole sponsors are also early supporters of the Foundation by way of a financial backing of research grants or summer research scholarships and we are doubly grateful for their additional involvement.

There were also a number of team entries and their support is also appreciated. Our thanks are extended to Ken and Liz Dempster, Arron Campbell, Dave Sharp, the Cameron Brothers, and to Paul Barlow and his team.