The weather gods again smiled on the Foundation as it hosted its third annual golf tournament on the St Clair course in association with OceanaGold in early October. 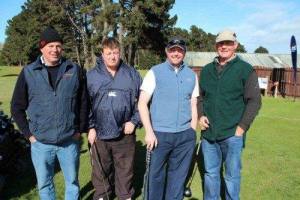 After several days of poor conditions the clouds parted and the field of 100-plus players enjoyed sunny, warm and calm conditions.

And the backing of OceanaGold as the naming rights’ sponsor, our show hole sponsor, Armstrong Prestige, all other hole and prize sponsors, separate team entries, a number of other supporters and the enthusiasm with which the players supported our raffle and the selling of ‘mulligans’ resulted in a profit of almost $22,000 from the day.

Those funds will be directed into the OceanaGold research grant, identified and allocated in May 2013. Money raised at the 2011 event was invested into an investigation into why diabetic women are more prone to heart disease with the results of that study sure to lead to earlier diagnosis and a more effective treatment strategy.

There were also a number of team entries and their support was also appreciated – our thanks to Ken and Liz Dempster, Dave Sharp, the Cameron Brothers, Gardens New World, Highland Real Estate Group, John Cutler, Opus International Consultants and Dunedin Venues.

There were a number of twists to the prize-giving with the Orbit Corporate Travel team winning the company’s own travel vouchers, the Forysth Barr quartet taking home passes to an event of choice at the Forsyth Barr Stadium, two of Body Synergy gym owner Rowan Ellis’ brothers being part of the Palmers Mechanical team which won memberships to Body Synergy, and the OceanaGold # 2 team taking top honours in the tournament to which the company has naming rights.