Low scoring was the order of the day at the Foundation’s annual golf tournament on the St Clair course in association with OceanaGold in early-October. 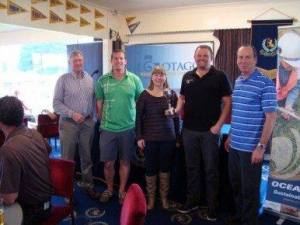 In near-perfect conditions and with the St Clair course in magnificent condition, birdies were the norm as the field of 100 players banded together to raise funds for the Foundation’s annual research grants’ allocation.

OceanaGold continued its strong support as the naming rights’ sponsor, all 18 holes were sponsore and there were a number of team entries. With prizes being donated and a number of other supporters also involved, and with the ‘mulligans’ and raffle selling well, a profit of just under $18,500 was made on the day.

Those funds will be directed into the OceanaGold research grant, identified and allocated in May 2014. Money raised at the 2011 event was invested into an investigation into why women are more prone to diabetic heart disease while the proceeds from the 2012 tournament has launched a study five years after diagnosis.

There were also a number of team entries and their support was also appreciated – our thanks to Ken and Liz Dempster, Dave Sharp, Opus International Consultants and Lab Supply Ltd.