The line-up for next February’s A Night to Remember, the Otago Medical Research Foundation’s 460-seat annual black tie dinner in the Dunedin Town Hall, could well be described as such.

On stage will be the world’s greatest rowing combination – the New Zealand men’s pair of Hamish Bond and Eric Murray who are unbeaten since the beginning of 2009. Over that eight-year, 69-race domination Bond and Murray have won two Olympic gold medals, six world championships and 16 World Cup titles.

They have seen off 32 countries, 136 different crews and 209 competitors. For good measure, they hold the world’s fastest men’s pairs time of 6 minutes 8.50 seconds.

As marvellous a combination they are on the water, they are chalk and cheese off it, and their presence in a Q & A session with Master of Ceremonies Steve Davie will make for terrific entertainment. 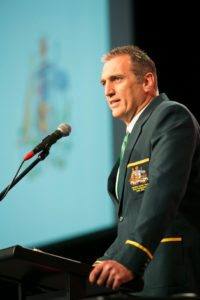 Backing them up will be Mick Colliss, captain of the poorly-performed Australian Sudoku team which finished last at the 2008 world championship in India.Not surprising really with three of the four players never having previously played the game!

The story of the Numbats, as they were known, is a story of epic proportion.

Along with the usual superb wining and dining, and raffle and auction of high-calibre, this year’s post-dinner entertainment will be in the hands of the 8-piece band Studio 54 who will close off the evening with a non-stop two-hour set which is sure to have the dance floor packed.

The 2017 dinner sold out in March with all funds raised going to theFoundation’s work of establishing world-class medical research at a catalyst, conceptual level in Dunedin.