The Foundation’s ninth annual golf tournament is almost upon us. 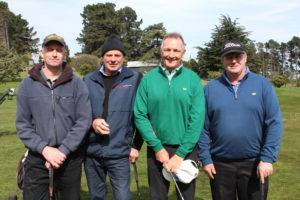 First staged in late-2010, the tournament – hosted in association with OceanaGold NZ – is now well established with more than $150,000 having been raised through the eight events played to date, all of which has been invested in new summer scholarships or research projects.

The revenue generated now at each tournament opens the way for the Foundation to offer a major research grant or launch up to four scholarships which set our brightest young minds on a research pathway for the first time.

Funds raised through the tournament in recent years have established such diverse investigations as determining how better to prevent a bacterium, prevalent in infections in hospitals, from causing those infections and become more easily controlled by antibiotics; finding the answer to just why it is that diabetic women are more prone to heart disease; how to more quickly diagnose refractory hormone prostate cancer, a particularly virulent strain of the disease; the rationale behind memory loss; and the value of bariatric surgery for over-weight, sedentary men along with education about changing their eating habits.

If you are interested in sponsoring a hole (with a complimentary team of four included in the package) or wish to enter a team, please contact Foundation Events Manager Steve Davie: 027 437 0335; stevedavie@xtra.co.nz).

This year’s tournament will be played on the St Clair course on Sunday, 23rd September with a 10a.m. shotgun start.