For the ninth straight year, the Foundation’s golf tournament out-manoeuvred the weather gods with the first three hours of the 2018 event played in near-perfect conditions on the St Clair course. 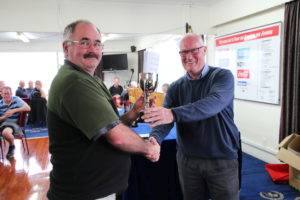 While the wind blew for the last hour, the rain stayed away until everyone was safely in the clubhouse. A chilling southerly blast then descended upon Dunedin with heavy rain and strong winds for much of the next 12 hours.

A field of 25 teams contested the tournament with this year’s event played under Shamble rules, leaving players more responsible for their own form than in a normal ambrose competition. There was certainly additional spice added on the putting greens and those who bought Mulligan’s re-play added great value to their team.

Dr Alan Wright’s team adapted the best of those on-course, winning by more than half a point from the second-placed Palmers Mechanical team. The OceanaGold NZ # 1 side was a further point back in third spot.

More than $21,000 was raised on the day, this to be directed towards a research project to be launched, under the OceanaGold NZ name, next year. OceanaGold NZ has been the tournament’s major naming-rights’ sponsor for the last eight years.

Funds raised at last year’s tournament have been directed into a study by Professor Iain Lamont & Dr Kay Ramsay (from the Dunedin School of Medicine’s Biochemistry department) looking at how better to manage antibiotic use by those suffering cystic fibrosis, which is a debilitating lung and digestive system condition making breathing difficult and where those afflicted are subject to infection and digestive problems. It seems long-term antibiotic use can inflame these problems rather than improve them. This study will have implications for improved antibiotic treatment management for those with cystic fibrosis – and, which is the optimum outcome for research, a greater quality of life.

It was a great day out and planning is already underway for the 2019 tournament, which will celebrate the 10th anniversary of the inaugural event in 2010.

Full results from the 2018 tournament are:

Closest to the pin in the 11th with the second shot: Connor Ross.

3rd: OceanaGold NZ # 1 (playing off a handicap of 9 and finishing with a nett score of 56)